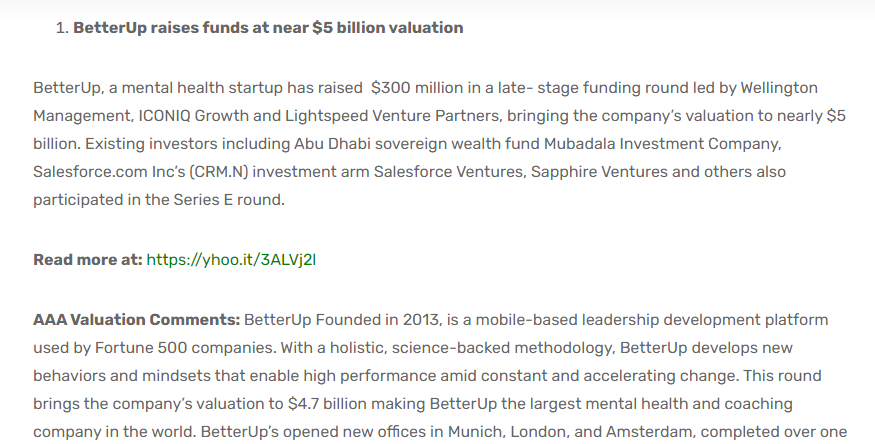 Edtech platform Vedantu has raised $100 million in series E round valuing the company at over $1 billion. The funding round was led by Singapore-based impact investing fund ABC World Asia, and also saw existing investors Coatue, Tiger Global, GGV Capital, Westbridge, among others. With the current valuation, Vedantu has moved on to become the 28th Indian unicorn in 2021 and 5th edtech unicorn.

AAA Valuation Comments: Vedantu is an e-learning company that provides a software platform connects tutors and student, provides real-time one to one teaching to students online across k-12 and test preparation segments. Across 48 countries, over 2 lakh paid users and 35 million students access this platform, expects over half a million to turn into paid users in this academic year. Turnover was increased of almost 3x times in 2020. Vedantu acquired doubt solving app Instasolv in feb and majority stake in Pedagogy in july.

SaaS Labs has raised $17 million as a part of its Series A funding from Base 10 Partners and Eight Roads Ventures. The company is a a cloud-based platform that builds productivity and business process automation software for SMBs and enterprises.

AAA Valuation Comments: Saas Labs develops software products that revolve around productivity and business process automation. Founded in 2016, the India-based company develops products for sales, support and marketing teams as well as contact centres to enhance productivity. With a 70-member team in India and the Philippines, SaaS Labs plans to double headcount by the end of 2021. The company currently serves over 6000 companies globally, including Divvy Homes, Jaguar, Ernst & Young, and Walmart. SaaS Labs currently has two main products: Justcall and Helpwise. The company will use the funding to expand its customer base, hire people, and release new products and services.

Artificial Intelligence driven market intelligence platform, AlphaSense, announced that it has raised $180 million in its Series C funding round led by Viking Global Investors. This round brings the total funds raised by the company to $300 million since it was founded in 2011.

AAA Valuation Comments: AlphaSense was established in 2011 and headquartered in New York, is a market intelligence search engine that uses AI specifically designed to understand and sort business information, providing curated public and private content to its almost 2000 enterprise customers in a way that expedites market and investment research. AlphaSense is trusted by over 1,800 enterprise customers, including a majority of the S&P 500, over 75% of the S&P 100, 70% of the top asset management firms, 76% of the top consultancies, all of the largest 20 pharmaceutical companies, and leading companies in wide-ranging industries such as energy, industrials, consumer goods, and technology. AlphaSense’s technology leverages AI and NLP to extract relevant insights from an extensive universe of public and private content, including over 10,000 premium business sources. AlphaSense employs over 450 people across offices in the U.S., U.K., Finland, and India.

The Tata Group acquired struggling national carrier Air India with the highest bid at nearly $2.4bn, an airline it founded almost 90 years. More than two-thirds of the airline’s revenues come from its international operations. The group already operates two airlines. One is Vistara, which is a joint venture with Singapore Airlines and budget airline AirAsia India, a venture with Malaysia’s AirAsia Group Bhd.

AAA Valuation Comments: The government has approved a bid of Talace Private Limited (“TPL”) a wholly owned subsidiary of Tata Sons Private Limited to own 100% of government stake in Air India Ltd (“AIL”) along with equity shareholding of AIL in Air India Express Ltd (“AIXL”) and Air India SATS Ltd (“AISATS”) for an enterprise value of Rs. 18,000 crores which includes debt of Rs 15,300 crore and cash payment of Rs 2,700 crore. The AIL held 100% stake in low-fare unit Air India Express (“AIXL”) and 50% stake in ground-handling firm AISATS. Out of the total debt of Rs.61,562 crore, remaining debt of  Rs. 46,262 crore was taken over by Air India Asset Holding Ltd (AIAHL), along with the non-core assets of Rs. 14,718 crores. The Air India and Air India Express will join Vistara and AirAsia India in the Tata’s table, allowing the group to find synergies.